A new toy of mine has been the Audio Intelligence Devices, Bird dog 360 Receiver. This is an old school, professional grade direction finding receiver made in the late 1980's. These were commonly used by private detectives and police departments to track suspects while driving vehicles. They came with very specific transmitter frequencies and a magnet mount transmitted that needed to be placed on the vehicle. The receiver consists of two main components. 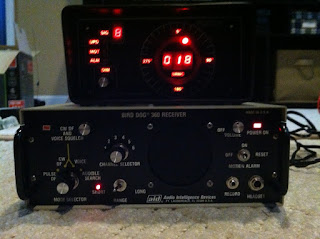 The main components of the receiver are the receiver box and the display unit. The receiver box allows for the reception of up to 6 transmitters at a time and can look for pulsed RF signals as well as audible modulated signals. Continuous Wave (CW) and voice settings allow you to listen to more than just the transmitters included in the kit. Line lever outputs are included for headphones and connection of a tape or digital recorder. A large speaker is on the face of the receiver, and puts out some loud audio. A ribbon cable with locking connectors sends received data to a display unit that can be up to three feet away from the receiver box. 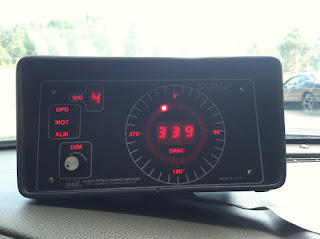 The display unit has the common circle of LED's and a center display that gives a numeric value to the bearing of the received signal. Signal strength and indications for movement alarms can be shown as well. The entire display is red and can be dimmed to a point where no light is output. This is perfect for those discrete moments when everything needs to go dark. These would have been used in a van or truck with blacked out windows or curtains most of the time, but you never know when you may need this feature. These two boxes connect to four antennas, and receive signals from a small magnet mount transmitter. 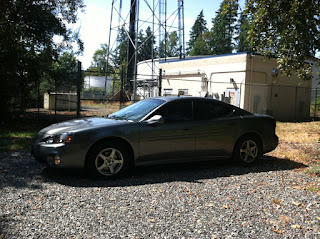 The antenna array is also magnet mounted to the roof and must be in a specific square orientation. Each antenna is the same length and uses the Doppler effect to determine bearing and distance. What this means is that each antenna receives a signal and each signal is compared. The one closest to the transmitter determines the bearing. Then the other three are used to determine strength. electrically this requires the antennas to be separate from each other physically, but with the same length of cable, and insertion loss. With four antennas, with the same cable, same resistance and other electrical factors, it is easy for an electronic circuit to determine direction and signal strength.

Then it is a matter of driving around and getting used to the unit. Neither the receiver box or display nit has any way to connect it to the dash. No suction cups, Velcro, or mounting brackets are included. These really look like they would be mounted to a shelf or desktop. Small rubber feet are on the bottom of both units. The display box being so light that the ribbon cable forces it to go where the cable folds push it. I use this system with the receiver seat belted to the passenger seat and the display wedged between my windshield and dash. The red display and background lighting match perfectly with a Pontiac or BMW back light scheme.

In 2015, many people may wonder why a hardware direction finding kit is useful. Software and computers have replaced a great deal of test equipment and radio gear. Well in the case of direction finding, even the software based systems require the use of hardware antennas and some form of interface box. The  fact that a computer is not required could be seen as an advantage or a fault. Computer based receivers could log the data better, but would require software updates, a computer to be booted and connected, and Microsoft licenses to be updated on occasion. For stand alone units, they just work, and do not need updates to work. Their is also no possibility of malicious code or corrupt software causing damage to the equipment. For the amateur user, the only other real option is the Ramsey electronics kits. these are small plastic kits that are for hobbyist use, they are not as rugged and do not appear to hold up well with permanent installation.

For those with the need to find and range a specific radio signal, look to used commercial gear to fill this need. As a better alternative to the hobbyist kits, this type of receiver can be found on auction sites and used radio locations. Seek out county auctions, police and fire department sales. Often times the hardware is older, but fully functional. It may only lack a manual or a cable. I have had great luck finding very well made hardware that has minimal usage time for cents on the dollar this way. You can build up your arsenal of radio gear quickly and it will last longer in the field. Good luck on the fox hunt, happy hunting.
Posted by Ludivocus at 6:27 PM